Our members tell us why they love driving electric vehicles. Hint: they're fun!

It’s National Drive Electric Week – and we at Western Washington Clean Cities are amped up about the increasing availability and diversity of electric mobility options.

More electric cars than ever are on the streets. As of June 30, 2017, nearly 25,000 plug-in electric vehicles (EVs) were registered in Washington. This reflects an increase of 37% since last year.

We can attribute part of this growth to ever-growing options. More auto manufacturers are making EVs – with new makes and models coming to market each year.

Mere days ago, Nissan North America debuted the 2018 LEAF in Washington. We got a sneak peek at our Join the EVolution event and we like what we see! The 2018 LEAF boasts a 150-mile range, new look, and the “e-Pedal,” a technology that allows drivers to accelerate, decelerate and stop with a single pedal. The 2018 LEAF should be available in early 2018. 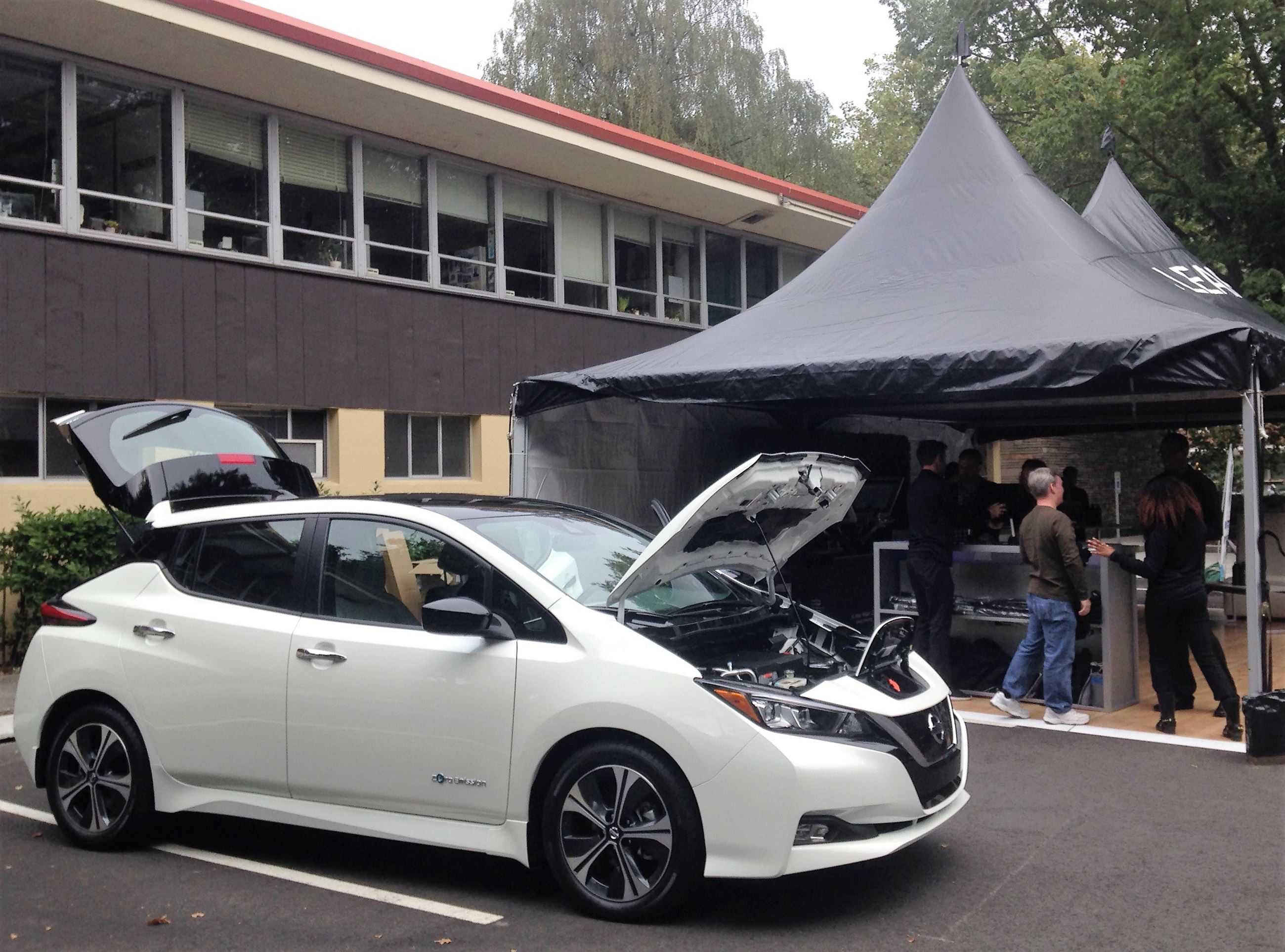 This past spring, Chevy released the long anticipated Bolt, which gets an EPA-estimated 238 miles on a single charge. Washington State was among the first fleets in the county to place its order, purchasing a whopping 130 for state fleets!

Workhorse (and new Western WA Clean Cities member!) unveiled the working concept of its W-15, the first plug-in range-extended pickup truck. The W-15 is expected to deliver 80 miles of all-electric range. Production vehicles should be available for demo in 2018, with production starting in early 2019.

As longer battery range options come to market, however, we can expect fear of running out of juice to become a thing of the past. This is especially true when you consider the development of charging infrastructure.

While charging stations are not yet as ubiquitous as gas stations, we’re making progress!  Here are some investments helping assure drivers that they’ll have convenient access to charging when they need it most:

For many local fleets, going electric helps their bottom line. Electric cars are cheaper to fuel and maintain. Affordable pricing on the state contract combined with sales incentives make electric vehicles a financially compelling option. Check out this recent Member Spotlight, which highlights how City of Seattle is literally saving millions of dollars through its electrification program.

For these reasons and more, it’s easy to see that the future of transportation is here. And it’s electric.

We asked our members about their experiences with electric vehicles. Here’s what they had to say:

When you don’t drive much, have a frugal spouse and you work for the regional clean air agency, what kind of EV do you get? The lowest cost four-seater: -a Mitsubishi i-Mi-EV. Plus I don’t mind driving a vehicle that looks like a jelly bean.

The Future of Transportation

EVs virtually eliminate tail pipe and GHG emissions in our region and cost about 40% less to operate than conventional gas vehicles. That is a lot of bang for your buck. I think government has a responsibility to operate in a cost effective and efficient way. Putting EVs in the fleet does just that. On a personal note, we drive an EV for our family vehicle at home. In 3 years we have had no maintenance issues whatsoever and I pay about $20 a month for “fuel” dispensed through an extension cord in my backyard. My favorite part is that the kids get so excited to plug the car in. EVs are fun to drive, save money and are good for the environment. This is the future of transportation. When my kids are old enough to drive I think internal combustion engines might be a thing of the past.

Fun To Drive AND Good For The World

There’s discussion about EVs just swapping one source of pollution for another (tail pipe vs power plant), but then I realized as our power supply becomes cleaner, so do our electric vehicles. I can’t do that with a gasoline powered vehicle, it will always require gasoline.

I love driving an EV, I feel like I’m doing something good for the world and the cars are zippy fun to drive. I sometimes drive a Leaf for my job - I like seeing how many branches I can get to grow on the tree on each trip.

Electric cars are zippy and fun to drive! It's exciting to see the technology evol ving -- the battery range is increasing and prices are dropping. Now drivers have so many vehicle choices. They are really starting to catch on. With more and more people buying and driving electric cars, we are hustling to get more chargers in more places to keep up with the anticipated demand. That's why I'm working to expand the West Coast Electric Highway network. People are going to want to hit the open road to explore the beautiful Pacific Northwest in their tailpipe-free, gas-free quiet ride.

Board of Directors, Plug In America

My husband wanted my next car to be an electric because it was cool. I wanted a car that I felt comfortable driving. With our LEAF we have both, but to be honest I hardly think about the fact that my car is electric. I just think of it as my car.

One For Work, One For Home
I love the quiet, smooth ride. Acceleration and maneuverability are so much more responsive than with a standard combustion engine! We have charge stations at my work site, and I enjoyed driving the Nissan Leaf pool car so much, I purchased one for myself to use for commuting. It’s really a great little car.

The City of Everett received in its new 2017 Ford Focus Electric earlier this year. During in-service, it was remarked that there was so little preventative maintenance required. It also looks just like a regular Focus hatchback, and can mislead anyone that doesn't pay attention to the "electric" badges. The City has also purchased a 2017 Ford C-Max Energi plug-in hybrid, as a complement to the Focus Electric, for out-of-area trips.

I drive the Focus Electric somewhat regularly for work, mostly within the city limits of Everett, and always in the heavy regen braking mode ("L" mode). I find driving it to be more fun and enjoyable than driving a regular gasoline-powered car. I like to play the "98% or better game" where I try to recover at least 98% of the energy in my stop each time (and I'm already pretty good at it). Sometimes, when using regen braking, where I start with, for example, 105 miles of estimated range, I am able to end my trip, with 108 or even 115 miles of range (depending on how efficiently I am able to drive and driving conditions). The farthest I have driven the Focus Electric has been from our site in Everett to a vendor in Seatac and back via I-5 without charging, and had 24 miles of estimated range remaining upon my return. Every time I drive in the Focus Electric with someone who has never driven in an EV, they always remark on how smooth and quiet it is on the road. I personally can see future use for more electric vehicles for City fleet use as available range increases and more vehicle types with full electric powertrains become available, such as pick-up trucks, SUVs, and truck chassis.

[Disclaimer: The opinion expressed here is from a City of Everett employee, but is not an endorsement by the City of Everett of any particular make or model of electric vehicle.]

Making An Impact On Climate Pollution

In the Northwest, with an abundance of hydropower, we enjoy a relatively clean source of electrical power. However, in terms of GHG emissions, that also shifts higher proportions to other sectors. The transportation sector in our region is estimated to account for 40-50 % of total GHG emissions. Driving an electric car is one of the most impactful things an individual can do to reduce GHG pollution. Once I drove an electric vehicle, the quietness and instant torque was thrilling! Low maintenance and cutting the hose to the gas station is icing on the cake. I can’t imagine ever going back to a gasoline powered vehicle.

A Hit With Users And Mechanics Alike

The City of Mercer Island has been integrating EVs into its fleet for the past seven years with very positive results from both users and mechanics. Across various departments, there are now three on-road vehicles (2 Kia Souls, and 1 Nissan LEAF), as well as three off-road EVs (all utility vehicles used in Parks Maintenance). Staff and residents alike love the quiet, non-polluting nature of these vehicles. 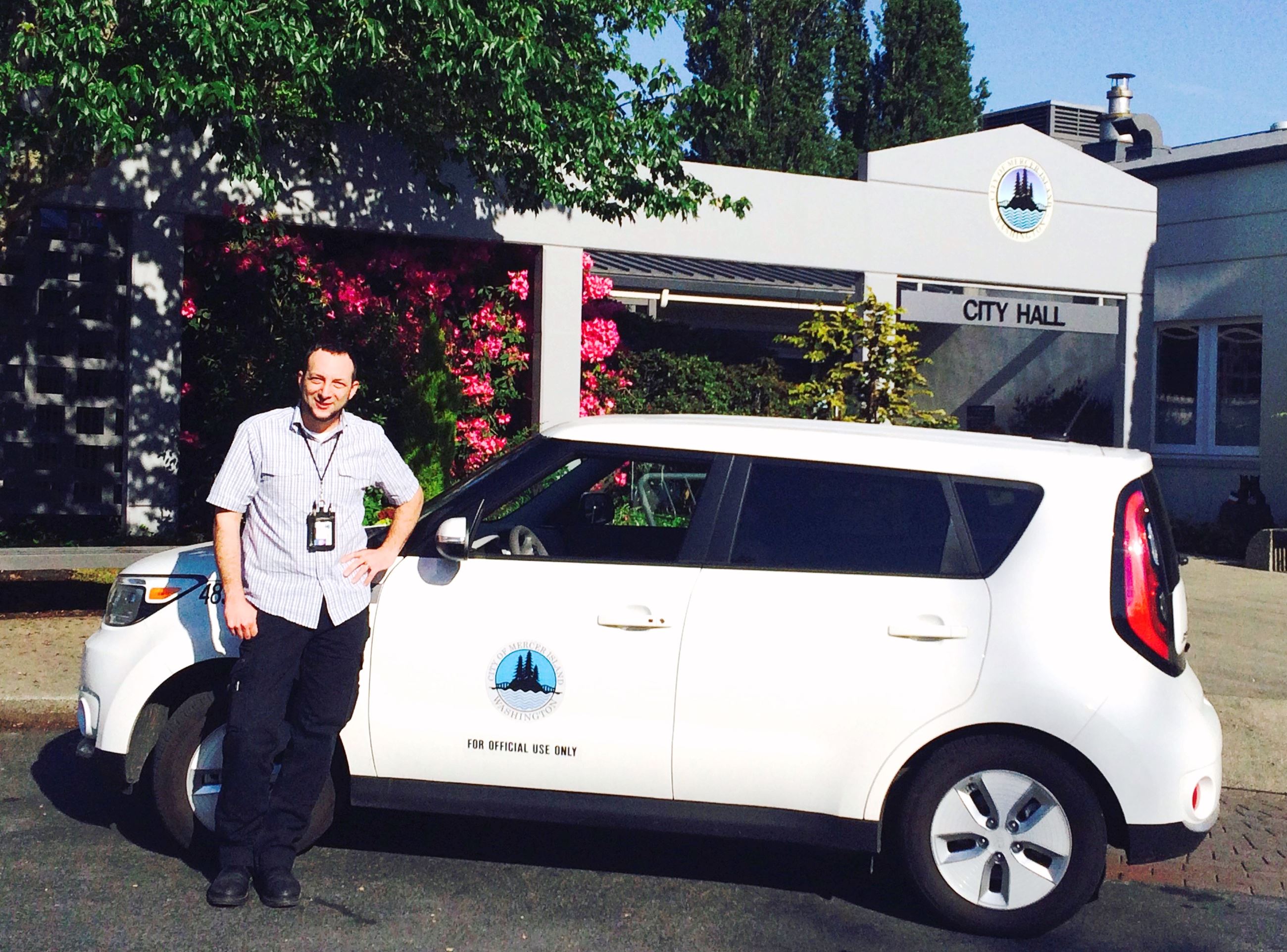 One of the City of Mercer Island's Kia Soul EVs

In general, drivers have needed little additional training and have no range anxiety due to the Island’s compact geography: just 13 square miles. Since the LEAF has been used as a motor pool vehicle available to many staff, occasional reminders to “plug in when done” have been necessary.

From a maintenance perspective, City Mechanic Rob Root has encountered nothing out of the ordinary: “beyond expected battery replacements for the older off-road models, it’s all been routine – except of course, there’s no oil change to worry about.” So far, operating costs have been well below a gasoline-fueled vehicle.

The City’s building inspectors are assigned usage of the Kia Souls and have appreciated their reliable performance since 2015. Early on, staff discovered that steep, wet driveways common on the Island demanded softer tires for better traction than the stock high-mileage tires that come with the vehicle. Staff also enjoy an added EV benefit: in the winter, the Kia’s are programmed to warm the car’s interior a few minutes before shifts begin, providing a comfortable work environment and saving inspectors valuable time each morning!

According to Inspector Brent Gardner, the Kia’s also trigger “a lot of appreciation from the community that the City is making efforts to go green.” Quite often at building sites, he says his arrival leads to a conversation about EVs and more than one homeowner has even purchased an EV after seeing the City’s Kia. The Kia Soul works well for inspectors with its higher clearance and space for unwieldy tools and equipment.

The City plans to add more EVs to its motor pool, and also keeps an eye on updated public works equipment that is increasingly offered with electric propulsion. To date, ten staff have purchased EVs for their own daily commutes to work, partly due to an employee test-drive program the City arranged a few summers ago; an additional public dual 240v EV charger at City Hall was just installed to accommodate demand.