From Garbage To Green Fuel 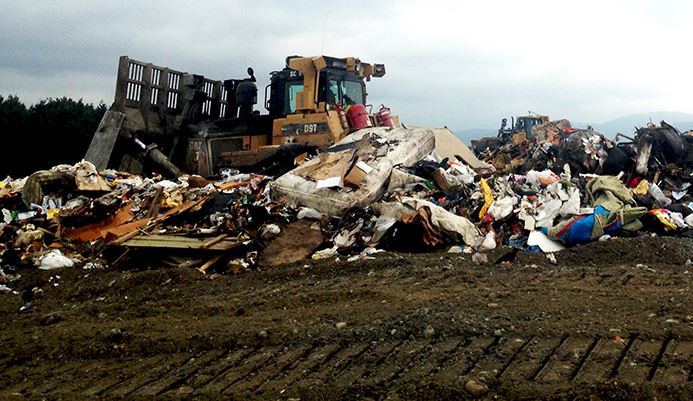 (LNG) are popular alternative transportation fuels, due to their lower cost per gallon and clean tailpipe emissions. Natural gas is a domestic product as well, which helps decrease our dependence on foreign oil. Most natural gas in the United States comes from fracking-- but did you know that it can also come from renewable sources like food waste, dairy farm waste, and decaying garbage in landfills? In fact, renewable natural gas (RNG) is one of the most environmentally friendly fuels in the world!

This autumn, the Western Washington Clean Cities team was treated to a fascinating tour of the RNG system at Cedar Hills Regional Landfill. This system captures gases produced by decomposing trash in the landfill, and turns them into clean natural gas for use in our homes, businesses, power plants and natural gas vehicles.

Located on 920 acres in Maple Valley, the landfill is owned and operated by King County, and receives 200 trailers of trash a day, amounting to 800,000 tons of garbage per year. That’s about the same weight as 400,000 passenger cars, or 84 Space Needles!

The garbage is stored in lined landfill pits designed to prevent environmental contamination. As it decomposes, the garbage produces mixed gases that contain large amounts of methane, a greenhouse gas roughly 25 times more potent than carbon dioxide. Instead of letting those gases escape into the atmosphere, Cedar Hills laid a network of perforated pipes at every five feet of elevation as the pits are filled -- over 90 miles of pipeline in total.

Under vacuum, the landfill gases are sucked into the pipes, collected into a main header pipe, and delivered directly to the nearby BioEnergy Washington plant. There, other contaminants and impurities such as nitrogen are removed from the gas to leave behind nearly pure methane, which is pipeline-quality natural gas. Puget Sound Energy buys the renewable natural gas and sells it to customers, just like any other natural gas. Today, the RNG from Cedar Hills Landfill is enough to power over 35,000 homes a year!

Special thanks to lead landfill gas operator Wally Grant and engineers Toraj Ghofrani and Shirley Juregnsen for the excellent tour of Cedar Hills, and to BioEnergy Washington Plant Manager Kevin Singer for the fascinating tour and explanation of the renewable natural gas processing plant.

Check out the slideshow of photos from our tour, below:

Want to take a tour of Cedar Hills Regional Landfill yourself? Visit their website to schedule!