WSDOT's new pickup truck is a breath of fresh air

Look out charging stations, WSDOT has a new truck that may be coming your way.

In 2018, the Washington State Department of Transportation (WSDOT) became the first state agency in Washington to purchase a plug-in hybrid work truck, a major step in their continuing efforts to reduce their carbon footprint.

Until now, most electric vehicles have been smaller, passenger cars. Electric trucks have been slower to be developed and come to market, meaning agencies with significant construction or maintenance work – and equipment – weren't able to easily switch out to the greener technology. Plug-in hybrid trucks like this are an important step for WSDOT's managers and crews. 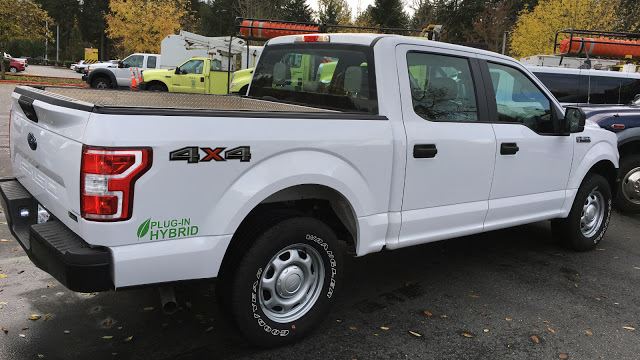 This F-150 was recently added to WSDOT's fleet, making them the first agency in the state to
purchase a hybrid plug-in work truck.

The new Ford XL F-150 light-duty truck will be used in all areas around the state including maintenance, construction and project engineering. WSDOT expects to get 21 miles per gallon with the new truck – a 50 percent increase in mpg compared to a traditional work truck. And because it's a hybrid, the truck can be dispatched anywhere in the state with no range concerns, and then be plugged in to charge at its work location. The battery pack assists acceleration for the first 90 miles of travel and then switches to battery regeneration for the rest of the route.

A company called XL Fleet builds the plug-in hybrid system that is added to a standard Ford F-150 light duty truck. It includes a 15-kwh liquid-cooled lithium ion battery pack housed in the truck bed. It can be charged using a standard J1772 charging port for Level 1 or Level 2 charging. 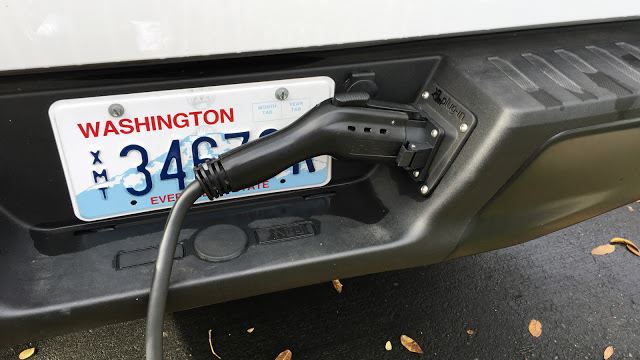 The charge port was placed on the rear of the truck near the license plate because many work
trucks are typically backed in to parking spaces.

The battery pack does take up some of the truck bed, but a slide out drawer for tools has been added in front of the battery to make the best use of space. A canopy also will be added, providing storage for items that can sit on top of the battery cover. The battery pack weighs 700 pounds, allowing the truck to still carry 1,200 pounds of payload.

This is another step in WSDOT’s continuing efforts to replace the agency's conventional vehicles with electric, plug-in hybrids or hybrid vehicles to meet both agency and state goals of a green, environmentally friendly fleet. Switching to these types of vehicle helps reduce WSDOT’s carbon footprint and emissions while still allowing our crews to carry out vital work.